According to the European Transport Safety Council, HGVs are involved in around 4,200 fatal accidents in Europe every year. Many of these fatalities are vulnerable road users (VRUs), in part attributed to the lorry driver’s lack of direct vision from inside the cab.  In countries with high rates of cycling, large good vehicles are often seen as the single biggest threat to cyclists: In Belgium, 43% of cycling fatalities involve lorries, in Holland 38% and in the UK 33%. In some cities, like London, lorries cause more than 50% of cyclist deaths.

Older designs (and many new designs, it has to be said) place drivers so high up in the cab, on top of the engine, that their vision of what is immediately in front and around them is severely compromised for the sake being able to see very far ahead.  Whilst this may be of value on motorways, for example, in urban environments it provides nothing but an accessory to danger, to blind spots, to risk of collision with a vulnerable road user.

However, there’s a new breed of lorry in town, the direct vision lorry. Often showcased as ‘concept’ vehicles, these are no longer conceptual – they’re out there, they’re working, they’re labouring in the city of London, sites tended to by the likes of industry leaders Cemex whose story we covered back in 2015.

Now the reason I bring this up is because a new consultation on safer lorries and improving lorries’ direct vision has been opened, with a view to enforcing drivers to retro-fit low side window panels on to their existing cab doors.  I mean, it’s technically doable but this retrofit ‘solution’ creates more problems for operators and serves to push wider-spread adoption of the far superior direct vision lorries further away. into the future.

I have no doubt that the proposal is well intentioned and I’m so glad that London’s Safer Lorry scheme is showing all the signs of further development with the introduction of this consultation, the current scheme does not go far enough to ensure safer lorries and, ever the optimist, I see the opening of these talks as an admission of that.

The artist’s impressions featured within the consultation hub, like the one above, present challenges.  There’s the immediate realisation that the big chunk of metal between the upper window and the lower window is still going to obstruct the driver’s vision, just as a vehicle’s ‘A’ pillars do.  Worth considering also, is whether the retrofitting of such windows could potentially make the driver more vulnerable in vehicular crashes?  In which case they ought to be performing test crashes on each modified vehicle, and that’s a lot of time and money that could be much better spent on purpose built direct vision lorries!  Collisions aside, by retrofitting these high cabs as opposed to encouraging take-up of the low-cabs, drivers are further in danger of falls from the cab.  It does happen; it’s food for thought – the fact that drivers have to climb in and out of their high cab several times a week and we’ve found a low cab solution that considerably reduces risk of falls, but we’re willing to abandon it, or at least delay it, in favour of a retrofit window panel.  See the problems for drivers?  And I haven’t even started on vulnerable road users and operators!

The introduction of this window panel relies on the driver not having a mate in the cab (obstruction of vision), not carrying anything on the floor of the cab (again, obstruction of vision) and the window being of a decent size in the first place – I’ve seen a few of these low window panels and they vary in size and shape; will there be a proposed standard?  The consultation also speaks if fitting these window panels ‘where possible’; I wonder then what is what would be deemed ‘not possible’?  Would it depend on there being no electrics in the window; what about those DAFs that have their radio speakers in the lower part of their doors?  Perhaps I’m being too simplistic here, but then again so is TfL.

I mean, this lower panel seeks to address ‘left-hook’ accidents, but TfL surely acknowledge that accidents are not limited to the left-hand side of the vehicle.  If they acknowledge this, that there are blind spots around the entirety of the vehicle and thus glass panels need to be placed in all blind spots ….why not one glass box … or perhaps just build a lower cab?……..I again present the direct vision lorry…..

I won’t delve too much into the implications for operators, it’s obvious: more money, more recertification, and most likely more animosity.  Just what our roads need.  For vulnerable road users, it’s a piecemeal – not a revolution.  We’re a 21st century city and our safety strategies should ultimately be set to a framework for what we envisage a 21st century city to look like.  Do I want to be pressed alongside high-cab vehicles that don’t have a direct vision of my 4″11 frame for the foreseeable future?  No.  I don’t.  Side panel windows or no side panel windows.

Of course, urban fleets will not be replenished with direct vision lorries overnight *sigh* and we have to do all we can to make the vehicles that are currently being used, safe.  But there are other ways to do this without setting back the direct vision lorry revolution (which is what I fear introduction of this new window retrofit will do).

Yes to side-guards and yes to class V and class VI mirrors, but we need technology too.  Seriously.

“A number of electronic devices which give warnings of cyclists’ and pedestrians’ proximity are also available, as is a device which shows a 360-degree view around the vehicle, as if from above. Informed by the testing done at the Transport Research Laboratory, TfL is engaging with test houses to develop an objective and independent testing protocol for these types of devices. If it is shown that any of them offers significant and consistent benefits, we will consider requiring them to be fitted to lorries in London.

“In the meantime, we propose that the fitting of vision panels in passenger-side doors, wherever they can be fitted…..”

I checked out the TRL website for its intelligent systems research for detection of cyclists (I’m aware we have other VRUs also) and it’s pretty vague.  Which is ironic because TfL’s own certification scheme, FORS, insists on in-cab technology – not extra windows – for its Silver and Gold members.

Now perhaps, it is exactly that – that TfL/TRL have not come to any concrete conclusions on what technology should be retrofit as part of the Safer Lorry Scheme.  But if that’s the case, should they not be investigating this as a priority?  From my experience in visiting the various new direct vision vehicles, it’s the one thing that the manufacturers have not designed out: the new designs are all fitted with an array of tech solutions, from sensors to cameras.  From this technology, we should be trying to ascertain which of these technologies are most effective in detecting vulnerable road users and what technology can strike the delicate balance between driver aide and driver distraction.

In the mean time, I’m unsure why TfL are trying to push for this new window legislation that currently does not form a part of their own rules for fleet operators.

Now I don’t form part of a “technology is the golden bullet camp” and it’s a real bug bear of mine when I hear of operators “eliminating” the blind-spot “with technology”.  When you look right, the whole of your left-hand side becomes a blind-spot.  And vice versa.  It doesn’t matter how much technology you put inside the vehicle, the driver is as good as his/her eyes and his/her training.  I believe it’s a view shared with the manufacturers of the direct vision vehicles – as it doesn’t matter how many windows you have, the driver can only look in one place at a time.  And it’s why the vehicle designs of the future incorporate both.

So why aren’t we consulting on that?

Why are we talking about tearing out bits of metal from existing high-cabs instead of incentivising operators to do away with them altogether?

In the words of Christopher Snelling, Freight Transport Association, himself, “Wholly redesigned cabs with lower seats can eliminate far more blind spots – including those that affect pedestrian collisions as well as cyclists.  But they are much more expensive – partly because so few are made.  London can now help make these vehicles a part of the mainstream by allowing operators to off-set the cost of buying them against a reduced congestion charge.”

The consultation runs until 4th March, and I hope people will consider the proposals carefully.  It’s a difficult argument to have – there’s a part of me that says, “heck, well every little helps” but having seen the direct vision lorries that are now on the market, I feel that we’re on the cusp of something great and these retrofit window panels are in danger of suspending it.  And all because TfL aren’t ready to have the conversation on effective technology. 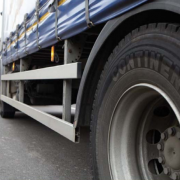 Want to join the discussion?
Feel free to contribute!

Pro-Active Versus Reactive Fleet Safety Management New Volvo FE Low Entry Cab
We use cookies to ensure that we give you the best experience on our website. If you continue to use this site we will assume that you are happy with it.OkView Privacy Policy
Scroll to top